Movetech UK helped Coventry University graduate James Hughes steal the show by adding another dimension to his degree-show exhibit – the vehicle of the future.

The Automotive & Transport Design student, who graduated from the Midlands campus this year, developed a lightweight vehicle for individuals who can’t drive regular cars, either due to their age, injury, or because they have no licence.

James built a 1:4 scale model of lightweight fibreglass to show off at his degree show. The model, which was rotating on a Movetech UK turntable, generated a lot of attention at the show.

He said: “There were 120 people displaying projects and about 100 of those were physical models, but I wanted mine to stand out more.”

The dimensions of the model are 83cm long by 42cm wide and weighing approximately 15kg. Movetech UK’s team rented James one of their mini carousel turntables, which made his model stand out and shine.

“I was delighted to find that Movetech UK made turntables in a whole range of different sizes, so there was one the perfect diameter for my project,” said James. “It helped generate a lot more interest in the model. I was able to show off the physical surfaces all the way round, instead of people having to squeeze around the back of the stand.

“Movetech UK was very helpful indeed. Even though it was a small order, they gave me updates on when to expect the turntable, and I was delighted with the impact it had on my final project.”

Movetech UK’s Tim Entwistle said: “As an engineering company ourselves we were fascinated by James’ idea for the quadricycle. We do all we can to promote fresh young talent in the industry, so when he came to us asking if we could help, we were only too pleased to do our bit.

“We make turntables in all sizes, some rotate full articulated lorries and others help display cakes in shop windows. So providing something that had the correct size and power requirements was relatively simple. We thought the end result of James’s model quadricycle looked fantastic.”

Images: www.flickr.com/photos/movetechuk and our photo gallery.
Video clip: On our YouTube channel or video gallery. 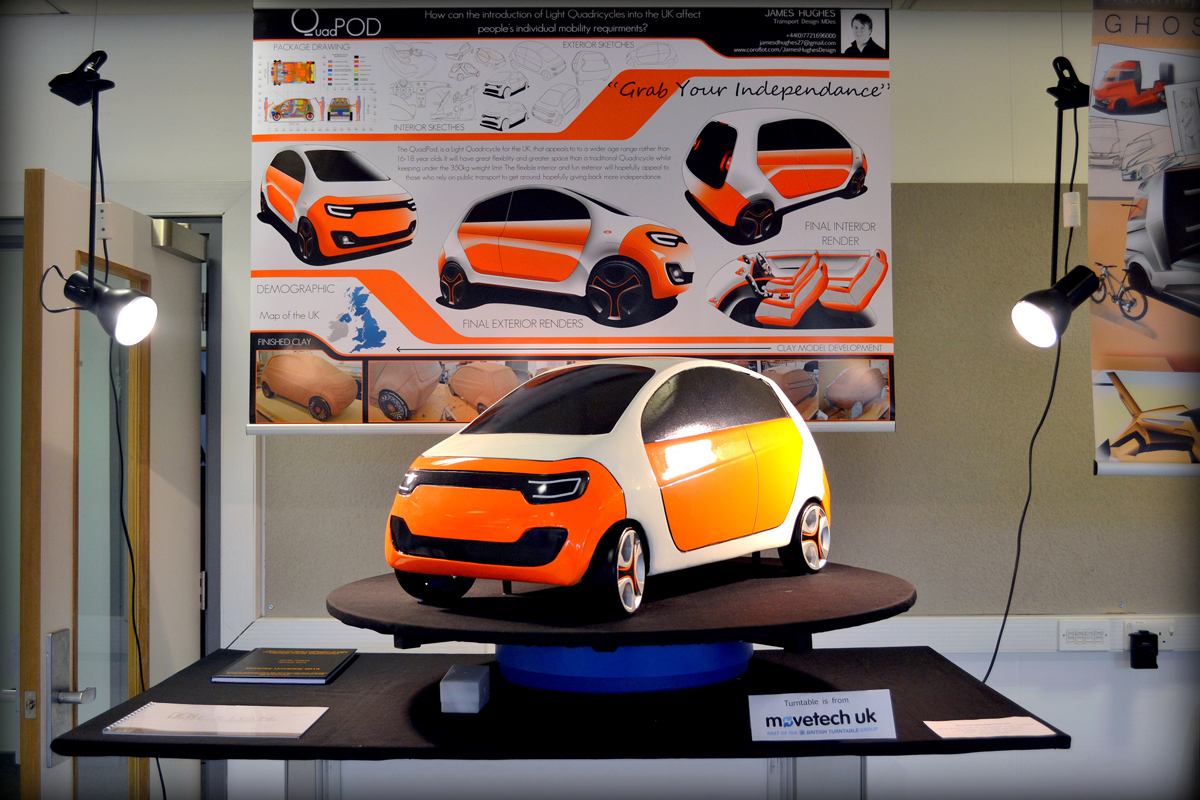